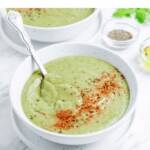 This Vegan Split Pea Soup is filling, flavorful and full of fiber and antioxidants! Split peas are a legume and high in protein, iron, fiber as well as other vitamins, minerals and phytonutrients. They're just one of the veggie all-stars I included in this nourishing soup!

Split pea soup is a fantastic (and inexpensive) option for vegans or anyone trying to live a little healthier! It contains plant-based protein, iron, antioxidants and fiber. Traditional split pea soup contains ham, but in this vegan version I skipped the ham and loaded it up with veggies: cauliflower, celery and spinach.  I used low-sodium broth and boosted the flavor with two white onions and four cloves of garlic.  It is silky smooth and so satisfying in the winter months! Best of all, my kids will eat it. It's the best way I know to get kids eating peas!

I loaded this nourishing soup with vegetables! This makes it filling, flavorful, and packed with nutrients. You can add in any veggie that sounds good (one of the best things about soup!) but for this recipe, I went with...

They aren't the most exciting-sounding vegetable, but split peas can be so tasty! Cook them right and they'll become an instant favorite...even with people who doubted it before! A few of the reasons I love cooking with split peas:

Let's get blending! You all know I use my blender non-stop for smoothies, but I also use and love it for soups. Carefully transfer cooked soup into your blender (you'll have to do this in batches! Just work slowly and be careful not to burn yourself on hot soup!) and pulse it until it reaches your desired consistency. If you have an immersion blender, this is the perfect time to put it to use.

In addition to split peas, I've included cauliflower, spinach, and celery for extra nutrition! Cauliflower is full of dietary fiber, vitamin C, and folic acid. Cauliflower is great for digestion and iron absorption as well. Spinach and celery are both high in vitamins K, A and C as well as folate! All of these are low in calories and add delicious savory flavor to this Vegan Split Pea Soup.

This Vegan Split Pea Soup is filling, flavorful and full of fiber and antioxidants! Split peas are a legume and high in protein, iron, fiber as well as other vitamins, minerals and phytonutrients. They're just one of the veggie all-stars I included in this nourishing soup! 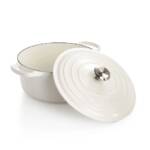 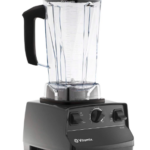