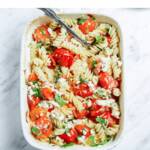 This is a vegan version of the TikTok pasta dish gone viral! It's a Vegan Baked Feta Pasta that creates a fresh and creamy tomato feta sauce tossed with gluten-free al dente pasta. After one bite it was declared a new family favorite and we'll be making it again and again!

GUYS! Whatever you had planned for dinner, I am here to tell you that things have just changed. I don't usually say this but you need to stop what you're doing and go make this immediately. Your life will be, in fact, forever changed. As a food blogger, I had to see what the Baked Feta Pasta Tik Tok viral obsession was all about. I'm a little late to the game here but I now understand the magic. It is real, people.

You may have seen videos of people making the now-famous dish. It's a block of feta cooked in a bed of cherry tomatoes with some olive oil and garlic. While that's in the oven, make a pot of pasta. When the cheese and tomatoes are done they melt into a fresh tomato sauce that gets tossed with al dente pasta. The sauce is creamy, tangy, salty, garlicky... all with such minimal effort too. I was initially skeptical if a vegan version would be good but I can honestly say that it is!

I think the best part of making this Baked Feta Pasta was my husband Bobby's reaction. He typically says everything I make is "Great!" He ate more than half of the recipe in one sitting, and after his first bite he said "I'm obsessed. What is in this!? This is restaurant quality!" Then, while I was in the other room taking pictures of it, he said "OMG, Elaine, this is really incredible. I need to get on Tik Tok" (coming from Bobby this is especially hilarious!). This level of enthusiasm about food is not typical for Bobby. There is a reason this went viral... it is legit.

I always grab the Jovial brands gluten-free pasta. I find it has the best texture and such a clean ingredient list! It works perfectly for a gluten-free Baked Feta Pasta and tastes incredible.

I love VioLife brand vegan cheeses! They taste just like the real thing. Whether you have an allergy, you're fully vegan, or you just want to incorporate more plant-based foods into your life...this is an awesome option. The vegan feta basically melted into the oil, tomato juices and seasonings to create a light, creamy, and incredibly flavorful sauce. If you want more creaminess you can add my Easy Homemade Vegan Cashew Cream Sauce using soaked cashews (learn about How (and Why!) to Soak Cashews in this post). But honestly...it really doesn't need it!

Thanks to Finnish blogger Liemessä-ruokablogi for the original #uunifetapasta inspo!⁣ If you make this recipe I hope you'll tag me on Instagram. I love seeing your delicious creations!

This is a vegan version of the TikTok pasta dish gone viral! It's a Vegan Baked Feta Pasta that creates a fresh and creamy tomato feta sauce tossed with gluten-free al dente pasta. After one bite it was declared a new family favorite and we'll be making it again and again!

See the notes for how to make the No-Boil Feta Pasta Bake (without having to boil the pasta separate from the dish - one less dish to clean and less hands on time!) 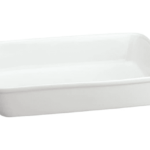 Substitute spaghetti squash or zucchini noodles in place of pasta if desired.

Stir in baby spinach while it is piping hot just before serving for more nutrients.

I have also seen recipes similar to this using butternut squash cubes in place of the tomatoes.  You could try other types of soft cheeses and other herbs (such as sage) with butternut squash.

*Note: The maple syrup was not in the original Tik Tok famous recipe but I like to add it to bring out the natural sweetness of the tomatoes.  It also balances out the red pepper flakes.

To make this a no-boil pasta dish simply add all the ingredients (except the reserved pasta water, feta and parsley) to the casserole dish.  Add 2 cups of water and mix well.  Cover very tightly with aluminum foil.  Bake for one hour (or until pasta is al dente) mixing and recovering tightly halfway through.  Uncover and add the feta in the center of the baking dish nestled between the pasta and tomatoes.  Drizzle the feta with olive oil and sprinkle with pepper and crushed red pepper flakes.  Broil uncovered for five minutes until the top is lightly charred.  Toss well, add parsley or basil and serve.