Just a couple ingredients and some time on the stovetop are all you need to make perfectly golden Caramelized Onions! Keep them on hand for soups, salads, bowls, or as toppings on tacos, burgers, and pizza. There are endless possibilities and all of them taste amazing! 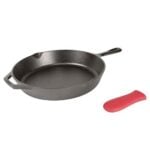 If doubling the recipe you may need to use a larger skillet or you may need to toss more often.  It is important that the skillet is not overcrowded or the onions will steam instead of caramelize.  I like to make sure that all onions are touching the bottom or side of the cast iron skillet to ensure they cook evenly and at the same speed.

For faster results, dice the onions instead of slicing them.  When diced they will take about 25 minutes to caramelize.  Just be sure to stir often and keep the heat as low as possible so they don't burn.

I typically do not use water when I caramelize onions.  If you keep the burner low enough, use a cast iron skillet and toss every couple minutes you should not need to.  A cast iron skillet is really key here.

Recipes that Use Caramelized Onions:

The Best Italian Meatballs Ever

Keywords: how to make caramelized onions